I have been researching the 325th Sicherung Division, more commonly referred as the Brehmer division. Commanded by General Walter Brehmer (involved in the plot to kill Hitler) the divsion then becomes part of the 1st Army group under Generalleutenant Hans Freiherr von Boineburg-Lengsfeld.

Units were rushed to the frontline in August 1944 from Paris to plug gaps after the breakout  of the 7th and 15th corps through Brittany and upper Pays de Loire (Pattons breakout). These police divisions were essentially for regional maintaining the peace and essentially rounding up French resistance, deportees, escaped prisoners, awol soldiers and downed Allied airmen.

They were armed with a mixture of equipment, French trucks, cars and buses and armoured cars, Czechoslovakian MG26(t) and mixed french and Czech rifles, mortars, russian and german AT  guns.

Charged with the defence of Paris, were moved to Mayenne and Sarthe region (Pays deLoire) on the 4-5th of August, the regiment were issued cycles, however they were motorised for the trip to Pays de Loire using requisitioned Paris Buses.

The first and second battalions seemed to of kept their Paris Buses, the third battalion were then on their bicycles.


The HQ was posted to Coulans-sur-Gee, Sarthe, Pays de Loire, on the main east/west road from Laval to Le Mans, with orders to hold the line between Loue, Saint Suzanne, Evron to Aaron. The  1st and 2nd  battalions seemed to have been split up into company groups to reinforce positions of the 708th Infantry Division, the third battalion was subordinated to Panzer Lehr and posted to Aaron, west of ville Mayenne. (The primary movement bridge of the American thrust over the Mayenne captured by Pattons troops on the 5th of August)

Combat 5th August to 16th August
3rd battalion
5th August moved to holding line position L'Aaron river with elements of the 708th regiment, American units force a crossing seizing the only major heavy vehicle bridge across the Mayenne river at Mayenne.
6th August under constant bombardment from american artillery, and aircraft along with the failure to pressure the American units streaming south to Laval and south east towards Evron, at Ville Mayenne recon elements of the 5th Us Armoured division probe north towards Ambrières-les-Vallées, and the Alençon road, Pré-en-Pail and south east of the hold line towards Evron - LeMans road.
7th August 3rd Battalion counter attack Mayenne, along with elements the 728th Grenadier infantry regiment, supported by Panzer Lehr armour. The dug in American troops defend the outskirts of ville Mayenne and south around the  Moulay bridge across the L'Aaron river. This was the last effort to re-take the important river crossing across the river Mayenne.
8th August 3rd Battalion retired North west to Pre-en-pail. Performing the interface between Panzer Lehr Division and 728th grenadier regt of the 708th Infantry Division.
10th August after American troops try to cut them off a retreat is ordered to Alençon.
11th fighting south of Alençon retreat towards Alençon.
12th retreat north west with remnants of the 9th Panzer and 708th divsions, hold the Ecouché -Argentan line
13-17th destroyed in the fighting around Argentan
17th surrender to American troops

1st Battalion & HQ Kamfgruppe Von Krawel
Kampfgruppe von Krawel, (Commander of the 1st regiment) formed 5th August were to defend the Laval - Le Man roads heading east to Paris. The Kampfgruppe consisted of  first and second  btn, with attached 17th SS recon and armour elements, Luftwaffe AA units from Laval airbase and broken units from 5th Parachute regiment, and Sturm Btn AOK7. The arnerican armour thrust break the line on the 6th in three locations and the units retreat towards  north east of Le Mans to take up new positions south of the newly arrived 9th panzer division, and some elements North of Chartres between La Loup and Courville. After heavy fighting Retiring to Nogent le Roi position on the 11th.

Remainders assigned to 352nd inf division,  defending the Eure river at La Loup, on the 15th August breakthrough retired to Le Boullay-Thiery, elements of the  341 stug brigade attached 9 vehicles, at 8pm on the 16th of August the survivors of the regiment surrendered to American troops.

13th Company partially destroyed on the 8th, losing all AT units in fighting north east of Saint Suzanne, remainders retreated north east to Sille de Guilliame, then mustered further east with the remainders of 1st and second battalion. 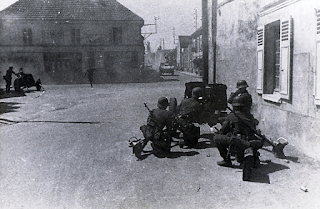 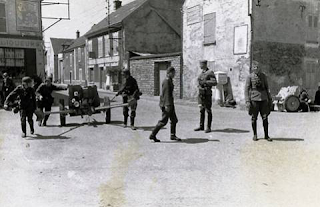 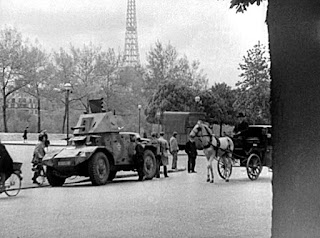 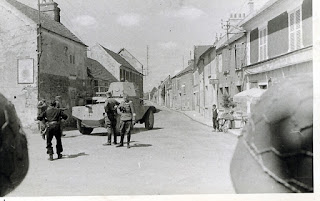