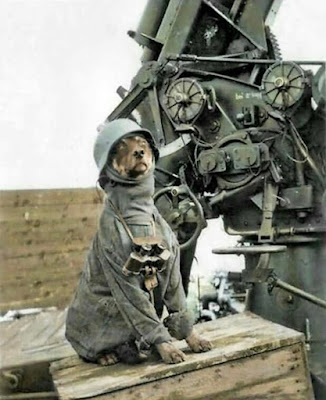 As my mind turns towards painting projects for 2021, I commenced on my part finished projects project drawers on my painting station....even though last year I concentrated on completion of a number of these one drawer remained untouched, my german artillery and AA guns and crew draw it is quite full of part completed pieces and crews. With that task in mind this week I commenced painting the Luftwaffe field division, Fallschirmjager and Luftwaffe AA and artillery crews. As always I like to gather all of my research and print it out on use my Imac as a digital resource. I quickly found I had nothing really for the markings on my AA boxes and sort of remembered what rounds looked like. I then decided to add my research here as a quick reference for me so I could just open one page or document when required. some of us are mad enough to add marking to shells and boxes..... 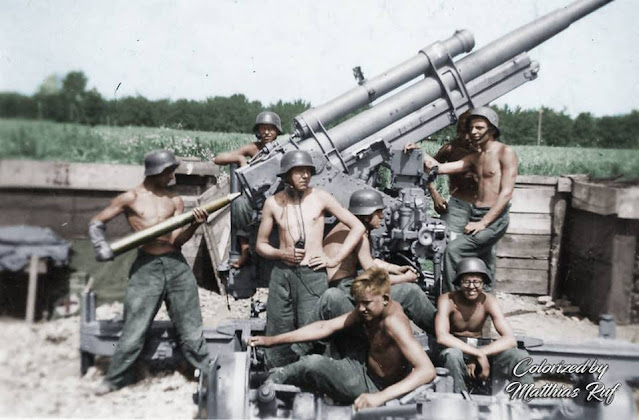 The 88mm gun ammunition was classified according to type of projectile as High-Explosive (HE) or Armor-Piercing (AP), smoke (Nebelgranate) or training practice projectile (Ubungsgranate).
The High-Explosive shell (Fp. Füllpulver) and the Sprenggranate (Panzersprenggranate (Pz. Spr. Gr.) contained a large charge of high explosive with one of the following types of fuzes: 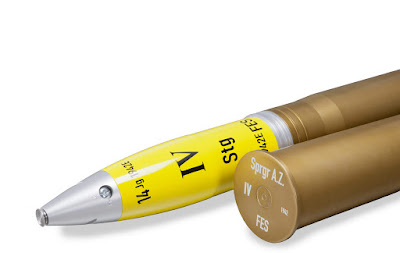 Markings HE projectile
14 is the bursting charge number
Jg1942E is the Place, Day, Month, year of fusing with work mark.
IV is the weight class.
Stg is the type of steel used for the shell.
FES is the type of bimetallic driving band.
Sprgr A.Z. type of fuze. 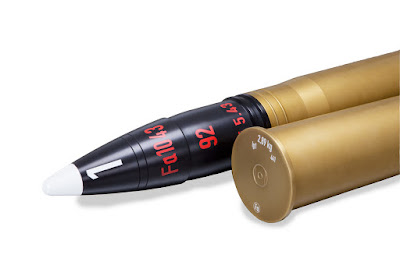 The Amour Piercing round1 Distinctive mark only used for 8.8cm Pzgr. 39.Fa1043 is the manufacturing place, day, month, year.92 is the number indicating the bursting charge numbers.7rdf 5.43 is the place, day, month, year of shell filling.2.89 kg is the weight of propellent powder.lg1 441 identify the type of propellent powder and the place of fabrication.Fa is the Armory or Arsenal where cartridge was made.

The Armor Piercing shell was used in Flak guns as well as in the PzKw VI Ausf. E Tiger tank. The ballistic cap is made in two pieces, originally black from early 1943 the noses of 8.8cm – 12.8cm AP shells were painted white to help loading them in the dark.

The cartridge case were brass, there are markings on the side wall of the cartridge in black unless noted.

MARKINGS ON SIDE OF CARTRIDGE CASE

The principle marking for identification on the base of the cartridge case is the number "6347," which appears on all the cartridge cases of the German 88-mm complete rounds. It will be noted that the primer design marking is "C/12nA St." The caliber and model of the gun may also appear on the base, for example, "8.8 cm. Flak. 18."

Generally German 88-mm rounds are packed in two ways, first was in individual sealed steel containers particularly for use in the early part of the war, the tropics or on U-boats, more common as the war continued as the use of a wicker basket which three rounds fitted into. They were shipped with one complete round, they are painted a slate gray color. 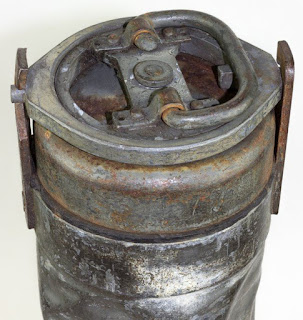 The steel container is hermetically sealed by a rubber gasket under a removable steel cover.

An example of grey U-boat container sold at auction in 2019, Note the wo tags are pasted on the cover. 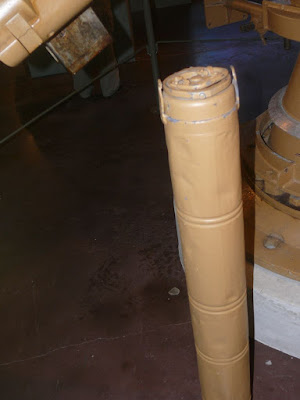 I have a photograph of one above in dunkelgelb from the Bayeux museum. Not known if this is original.

These tags were pasted on the container and on tags on the wicker baskets;
One tag of black paper is printed with white ink as follows:
"8.8 cm. Pzgr. Patr.
Bd. Z. f. 8.8 cm. Pzgr."

The other tag of white paper is printed in red as follows:
"Fur Tropen!
Normale Pulvertemperatur
+25°C." 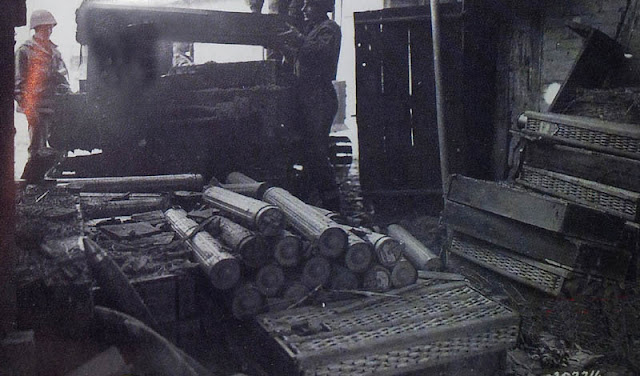 The wicker-type container contained three rounds. A metal cover is held in place by a leather strap. The base is also of metal. Round rubber stops at the bottom of the container protect the fuzes against jarring. The rest of the container is of wood and wicker construction. The wicker carriers were then placed in larger wooden boxes for transport, these crates contained three wicker baskets. I have found no markings for these boxes yet. 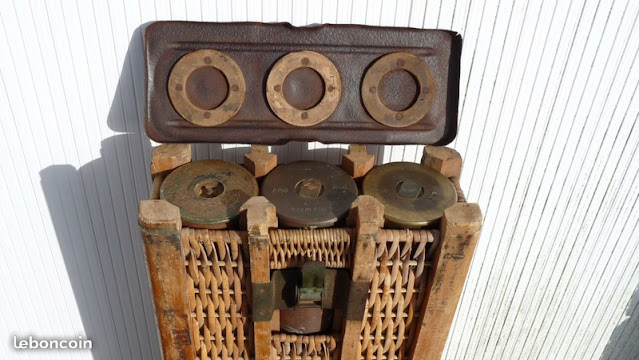 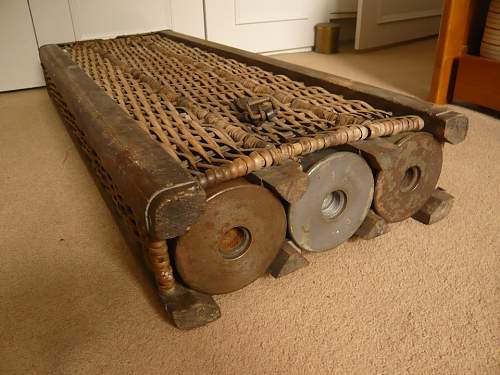 I have seen boxes also in use around some positions, but found no marking references for them for anti-aircraft ammunition, there are lots of references for anti tank rounds though. The boxes can be grey, or natural wood and can carry a single round or three rounds like the wicker case. 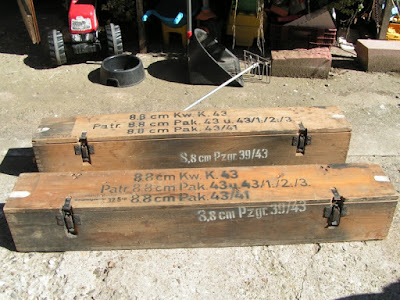 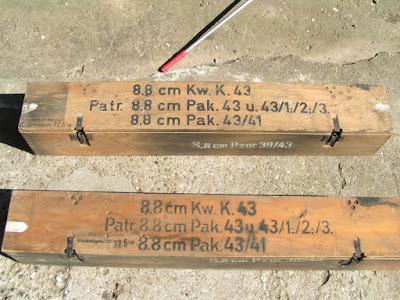 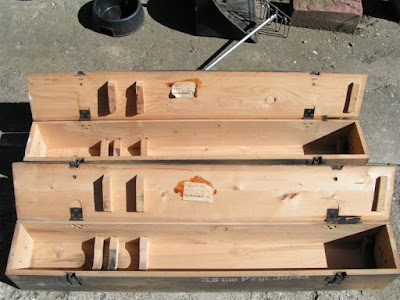 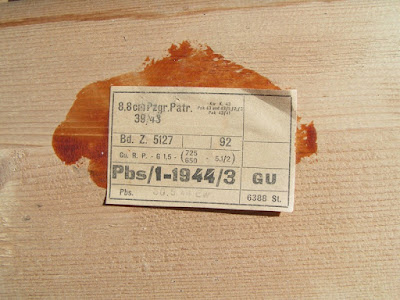