The next piece off the table is my heavy battery for my Dutch. 32 guns were purchased from the British government in 1920. One regiment was formed of three battalions was with the Vickers 152cm Lang Howitzer and were parceled out as Corps reserve artillery. Towed by farm tractors in tandem in the majority and resupply was by trucks. 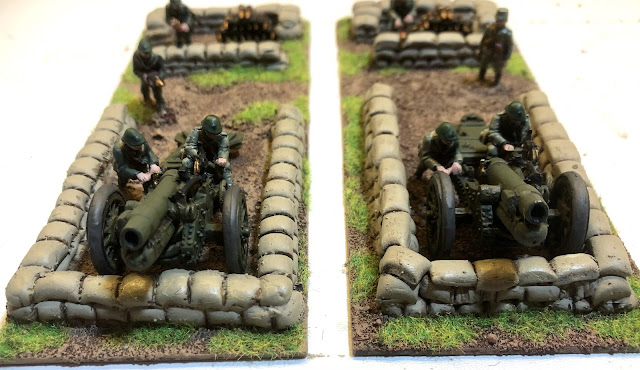 Off the desk today is two 75mm field guns, a limber with cassion and a observer element. The Dutch named the 75mm Krupp Siderius as the 7 veld gun, the guns served in both the Netherlands and in the Dutch East Indies. The 7 veld served the infantry divisions with 12 guns per battalion, and three battalions per division normally, two 7 veld and one 120mm or 150mm battalion per Infantry Division.
Sixteen 7 velds were modified for the light division with rubber tyres and were towed by heavy cars, the remainder had wooden wheels. Only 2000 rounds in total were available for the 7 veld on the eve of the war so many division only carried one resupply for the guns. The 7 veld battalions where in the majority horse drawn for the war, along with horse drawn supply and associated services. 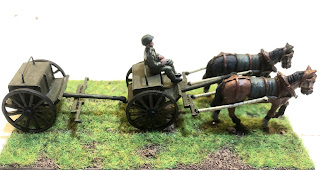 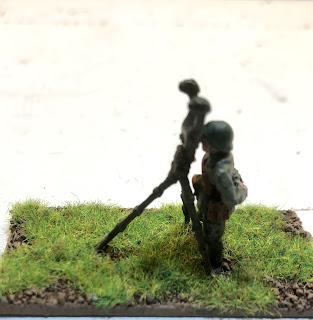 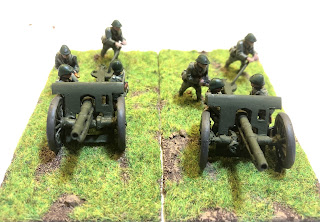 TL 1 was the Dutch name for the Oerlikon 20mm light anti-aircraft canon. The single barrel Oerlikon was a fine anti-aircraft gun and was excellent in providing cover from low flying aircraft up to 1800m. The Dutch army place an order for these weapons in 1939 and 170 were delivered before the war started, these were issued to light anti-aircraft companies located in infantry divisions and reserve formations. 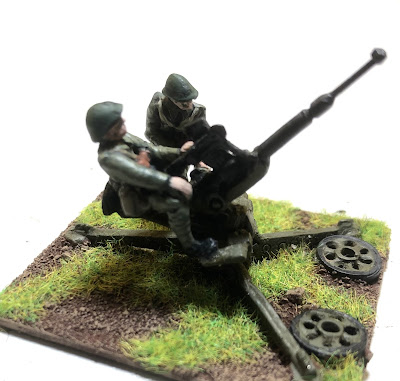 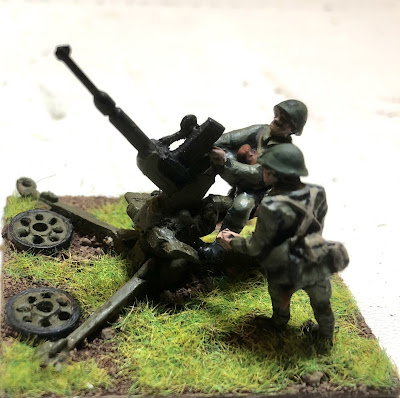 The gun and miniatures are from Early War Miniatures.

I was looking for a suitable staff car for my Dutch when I chanced across a photo of them using a Opel car, so I went looking and found this resin 1/76th Wespe Models version, it was a fiddly kit, with a bit of work to get things to fit, and a little bit of flash, being resin you need to be gentle with the build and it may last some wargaming through gentle handling.
The cobblestone base is scratch built and the driver is HAT plastic German, overall quite happy with the completed piece. It will join my Dutch command set. Next up some AA and tow. 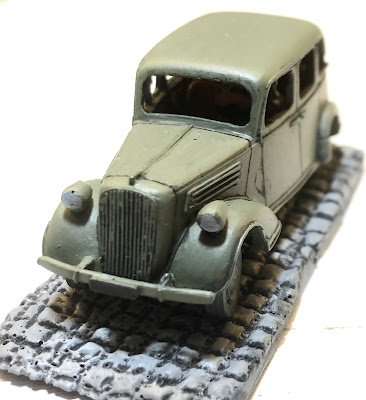 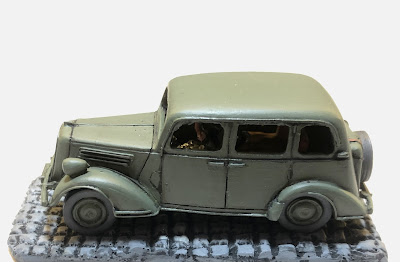 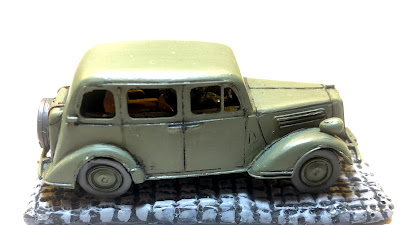 While I was researching my Belgians, I came across a reference to the Alvis designed hefty artillery tow truck, finding info on this beast is quite difficult as it seems a number of models were produced and all called "hefty".

The most common image is the trial version, but I believe the Chassuer Ardennes actually purchased the fifty vehicles of the C model. I could find little or no record of how many were built of each type, it seems several different were in production at the same time, all seemed to have the pivot in the chassis though.
I know I started this beast almost 5 years ago but it is now complete and awaiting paint!
WIP 1 from 5 Years ago 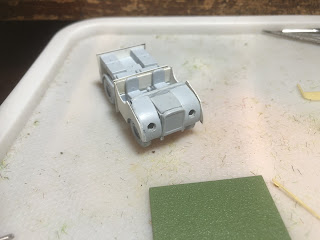 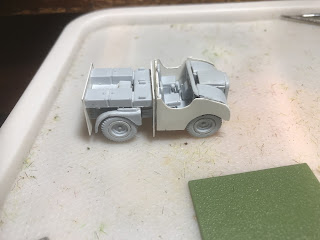 Finally Completed this year quite happy with it. Now to the paint shop! 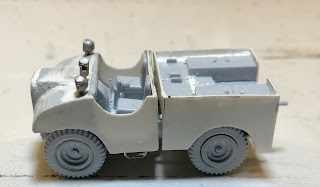 This year I want to complete a lot of my parked projects and get back to completing my 20mm early ww2 kit and armies.
The Belgians ordered fifty of these primarily for towing artillery and AT guns for the Chasseur Ardennais as far as I can research only thirty five were delivered before the war commenced. 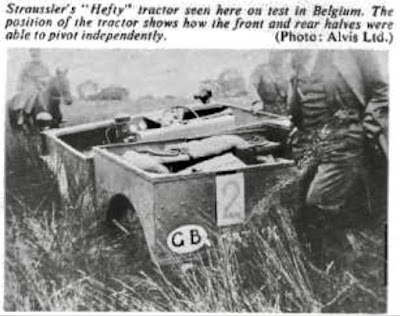 The C model Alvis Hefty, was conceived by Nicolas Straussler and presented to London Commercial Motor Show in 1935. It was powered by the Ford 3.6L V8 65 hp engine, weighing 2.2 T empty and was articulated and pivoted in the middle to make it possible to cross uneven ground.

A bit of a spanner in the works this weekend tested positive to Covid on Friday after feeling a little off. So last two days in bed, I thought today I may get a chance to do a bit on the desk, but concentration down to much to paint figures, but good enough for vehicles I thought. This vehicle has been part finished for some time all it needed was highlighting and marking up to complete. So on and off over a few hours I managed to get it done. Quite happy. The miniature is from Early War Miniatures range of Dutch. 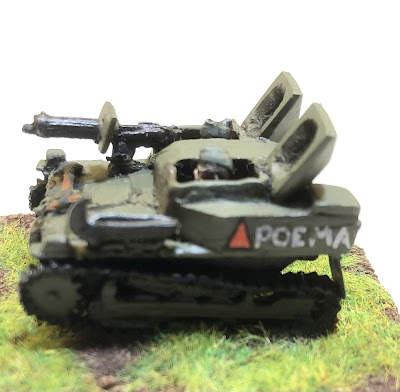 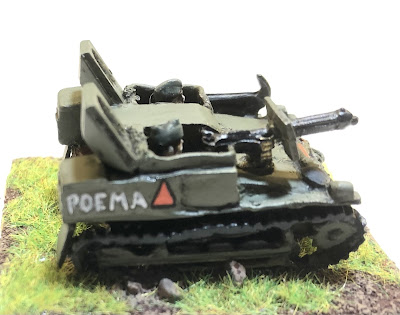 The Dutch had five of these for the invasion in 1940 and they were the only tracked vehicles in service. All of the Cardenas Llyod carriers were all named after big cats. I selected Cougar / Poema and painted it on by hand along with the Dutch triangle. As there were only 5 that is the total required for Rapid Fire Rules.
Next up will be some more horse drawn equipment and some AA.
Cheers
Matt
Posted by Bluewillow at 11:26 AM No comments:
Email ThisBlogThis!Share to TwitterShare to FacebookShare to Pinterest
Labels: 1940, 20mm, Dutch, French Wargame Holidays at L'Hotel de Hercé
Location: 19 Pl. Cheverus, 53100 Mayenne, France

Another Army I am working on at the moment is my Dutch. I have a lot in the part completed pile so quite a lot will make to end of the production line very soon. I would like to complete this little army this year.

I have a staff car, motorcycle to paint plus staff. I am planning a small diorama command stand. I plan to use my dovecote wagon, radio operator, command table and figures.

The black devils, I have half a battalion from SHQ painted that I used in a scenario once a long time ago,  I just need to fill out the rest of the battalion and add support weapons, these have been ordered.

I want to build two companies on motorcycles mounted and dismounted plus a HQ element. This will make up my recon element.

I just need to paint 2 DAF Armoured cars and complete my Llyod armoured carrier. As the only armour for my Dutch quite important!

I have two medium guns and two heavy guns to paint along with crews in a fixed position, and guns with  tow trucks, just need to complete them!

I need to purchase some bofors crew possibly SHQ, complete the 20mm Oerlikon AA gun and the horse tow. I also want to scratch build a listening device for my airfield Defence, just because….. 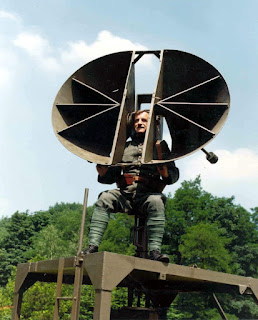 Adding a few more supply wagons and trucks too!

I want to complete my Fokker G1, which is built just needs a paint job!

Dutch supply truck
Finally had some time this week as we are in the middle of a major restoration of the third floor of the house, 200sqm of dust to fight with over the next two weeks at least! I have decided to complete some pieces from my Dutch project this year so they are front line at the moment. 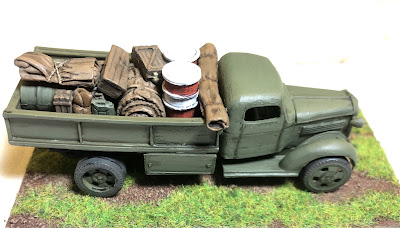 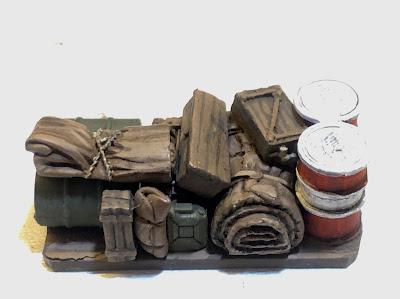 First to be completed is the Minairons miniatures resin truck. Not the prettiest model, and it needs a lot of filling to fix but with a bit of work and some extra bits placed on it such as fuel tank, jack box and tow hook it gets closer to the Dutch model. A lot of filling of the resin and even after a few dunks in hot water I could not correct the bent truck bed. After enough fussing I decided to add some scratch built and 3d printed bits for a removable load and some SHQ metal pieces also, including the driver. The truck will join my HQ unit for the artillery.

More Dutch coming this weekend as I need to complete my artillery build for the Wargamers forum.
Cheers
Matt