Due to Covid we thought we would have no Holidays this year, a fellow wargamer and saviour came along, Paul and Stella offering us to holiday with then down south in the Massif Central on the edge of the Alps. Paul and I have similar collections in the same scales 28mm Napoleonic, Ancients and 20mm WW2 and use the same rules, I guess we have chatted on forums over the last 15 years or so, but had never met face to face.

I think Paul’s collection of 28mm Napoleonic collection eclipses mine by quite a lot and you will find him regularly posting on General de Brigade and Rapid Fire forums. We decided to conduct a Sword Beach game using the Rapid Fire rules from the D-Day scenario book. Paul has a huge collection of ships, including large destroyers down to the landing craft and support ships, and a lovely table set up for D-day landing scenarios plus the specific funnies for the landing along with the Sherman DD tanks, and the normal French villages etc.

I elected to be the attacking Brits and Paul the defending Germans. The scenario calls for the capture and destruction of three of the bunkers and hard points along the beach plus one inland, a very tough ask. 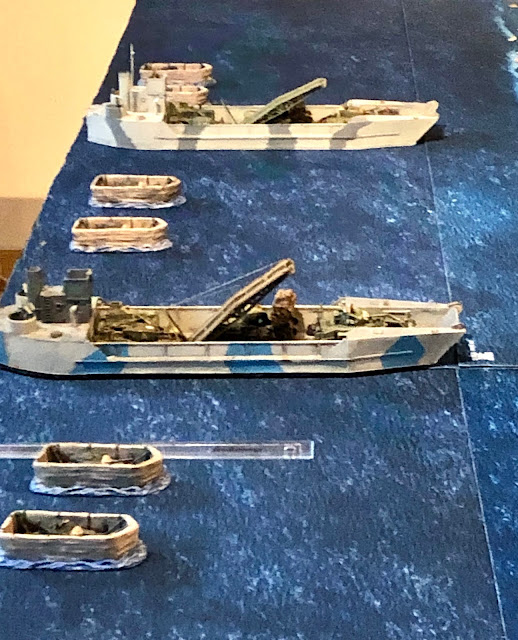 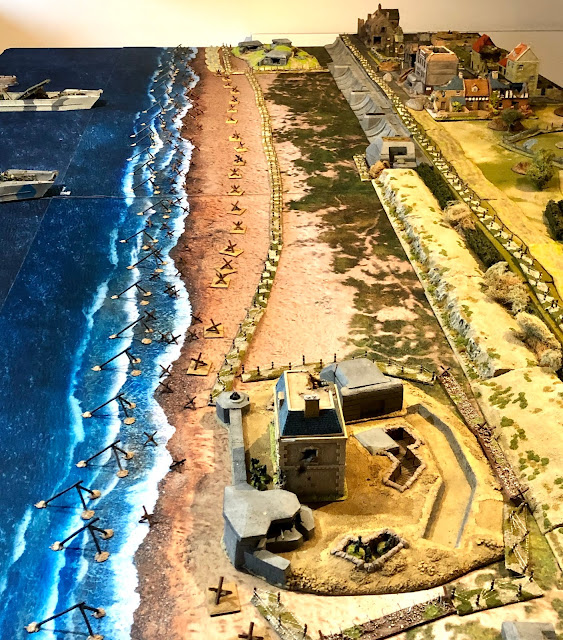 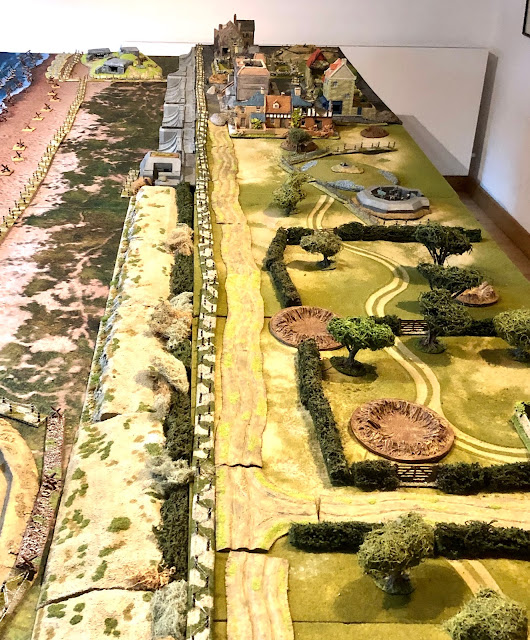 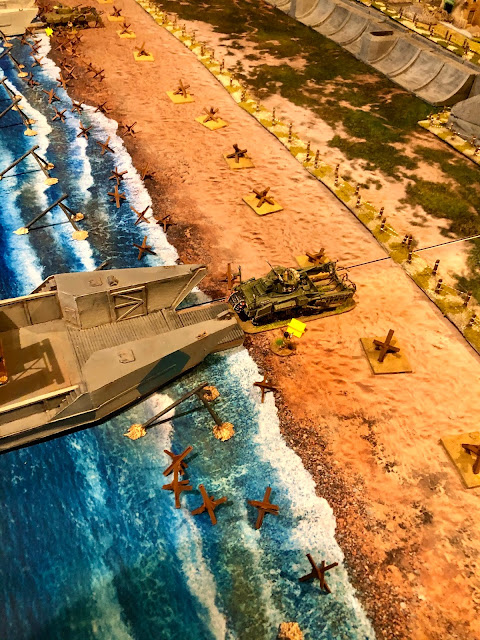 The initial landings go bad with a lot of the leading tanks hitting land mines and either destroyed or heavy damaged. 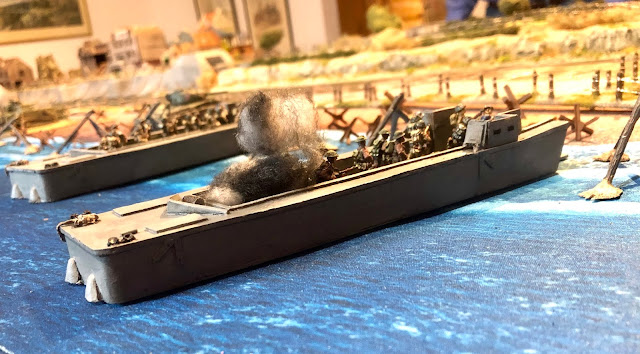 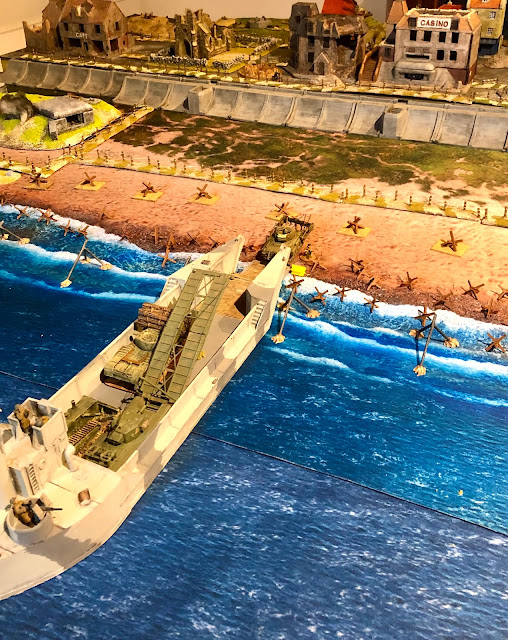 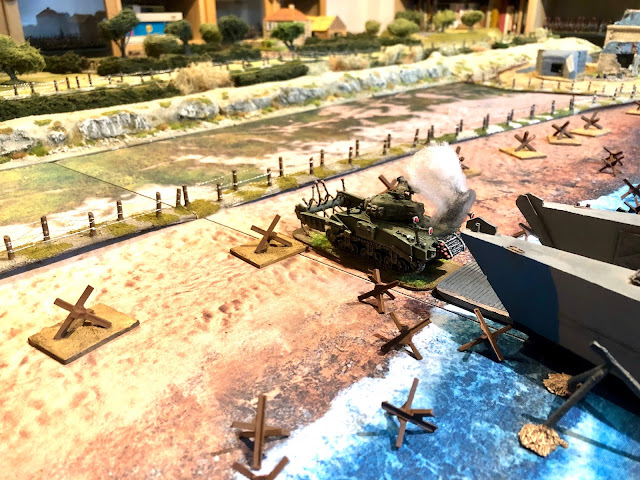 another heavy damage.......the story of the game for me lots of 1s and 2s rolled 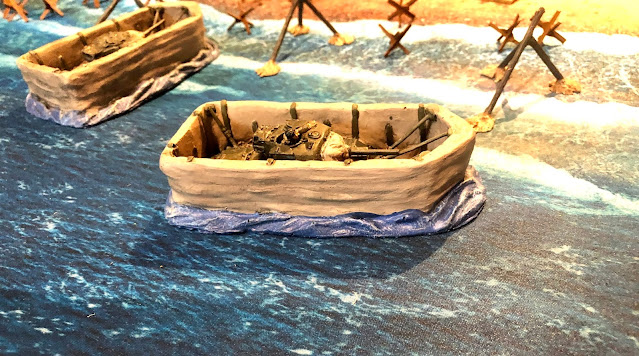 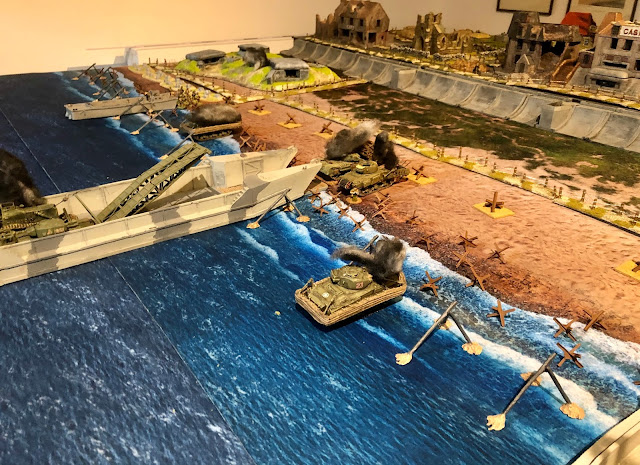 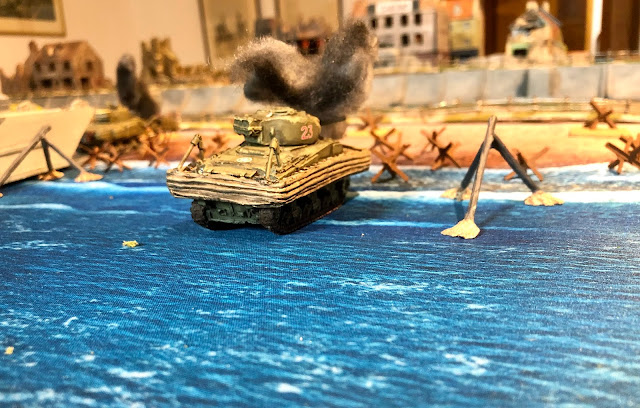 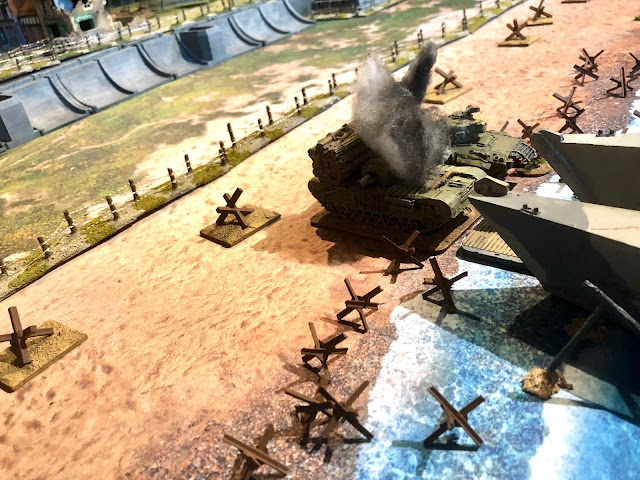 A second vehicle pushes pas the first only to hit another mine! 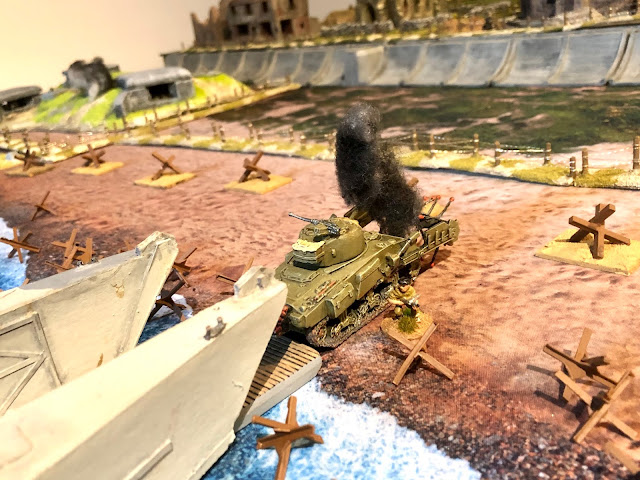 I managed to get all of my landing craft ashore unscathed but the unloading of the funnies was problematic with each one hitting a mine and being disabled or hit while still on the boats in the counter battery artillery fire. In the end only one made it up the beach. The Shermans wading ashore three were swamped and three made it ashore, all either getting taken out by mines or AT fire not a good start! 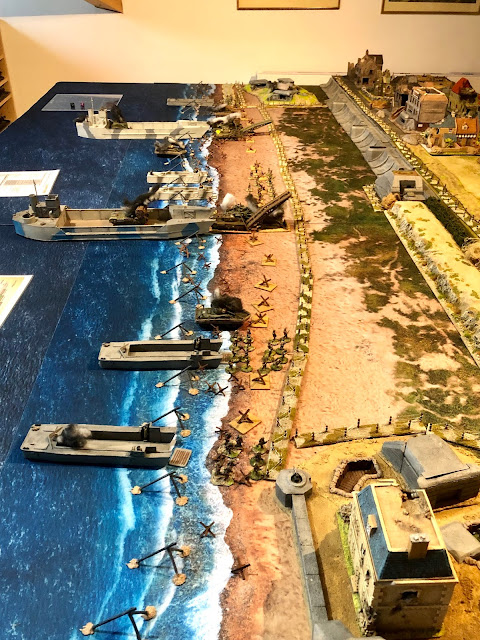 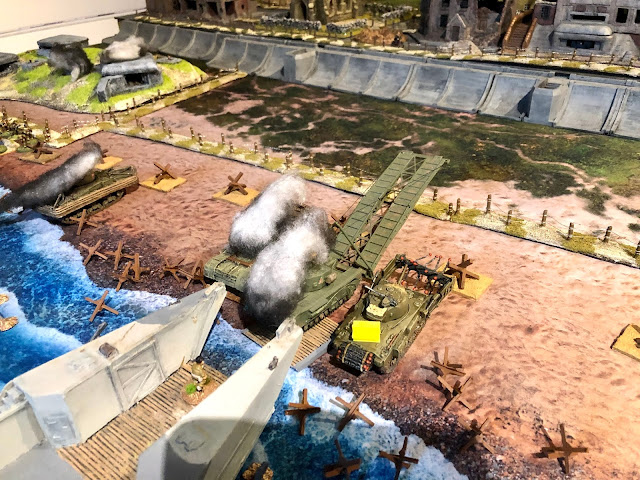 Next turn Paul makes sure of the funnies destroying the heavy damaged ones with AT fire......it was one of those days......... 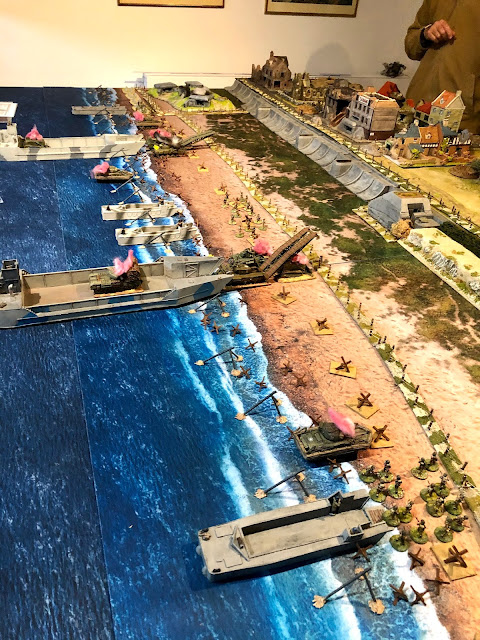 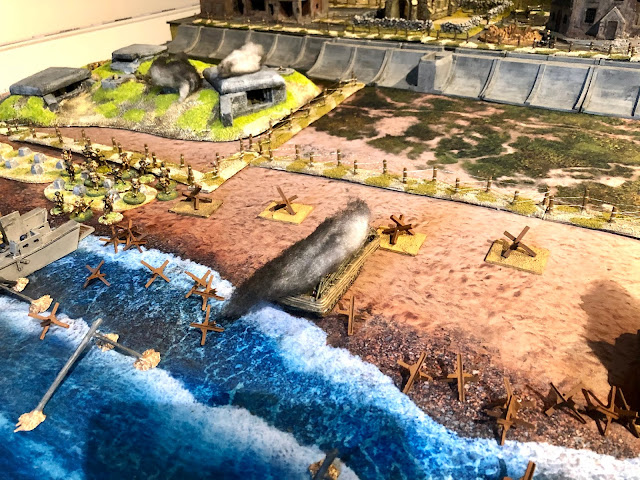 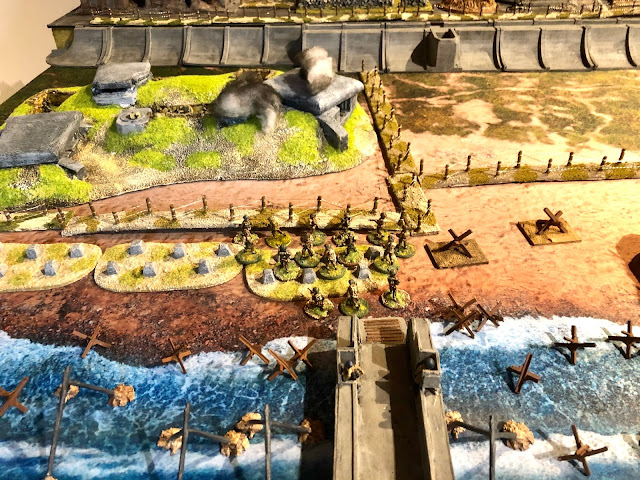 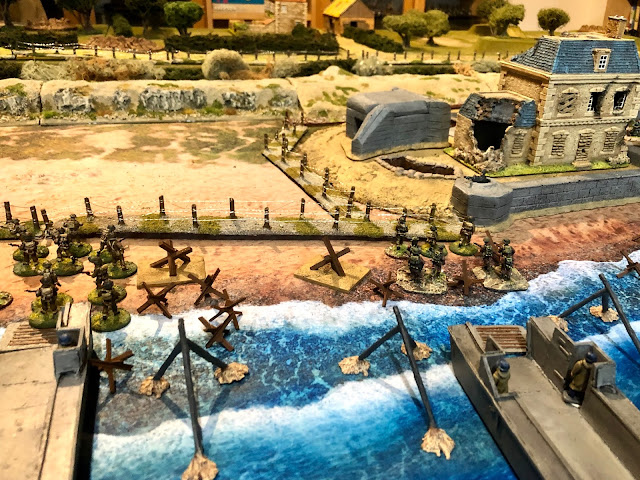 On the right another two companies, these guys do get cut up a little in the crossfire 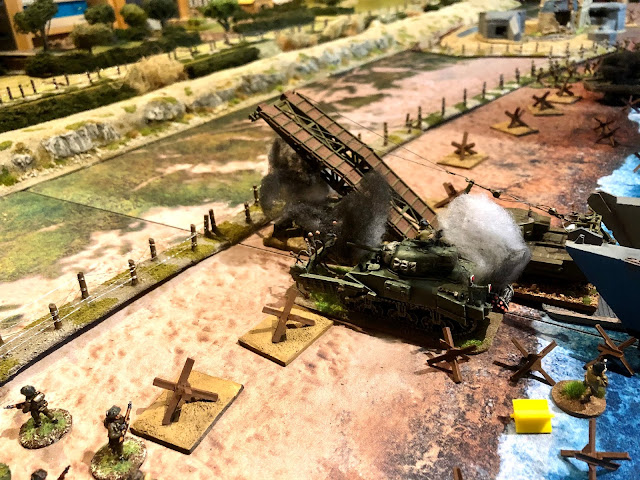 The infantry stormed ashore and surprising took very light casualties, however the remaining tanks were all knocked out except one which i leave covered by the other two tanks and await support 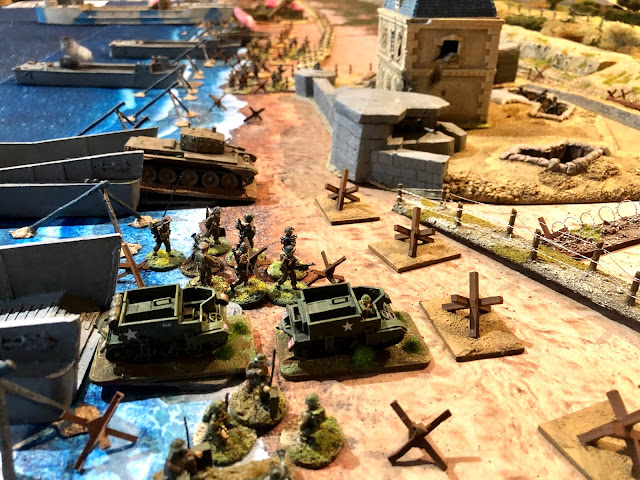 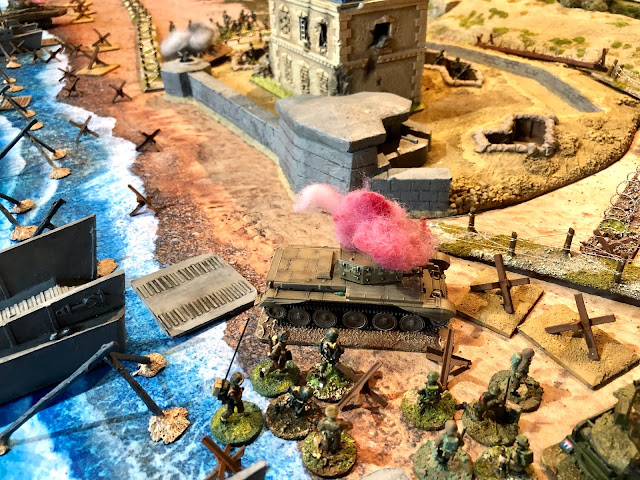 Again I lose the supporting tanks to mines! 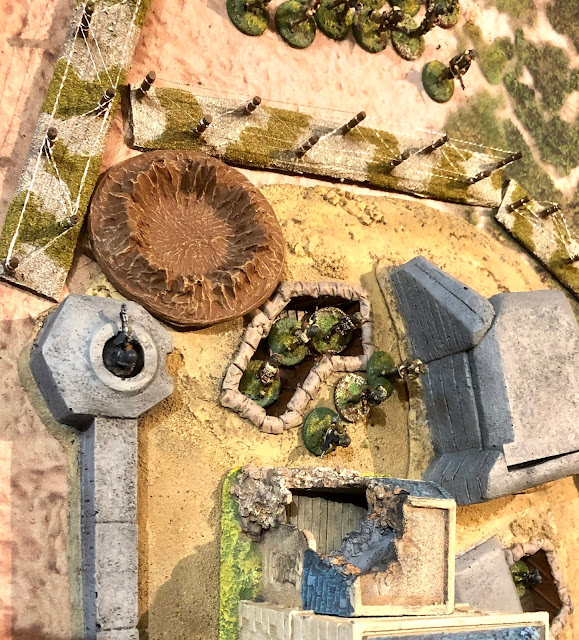 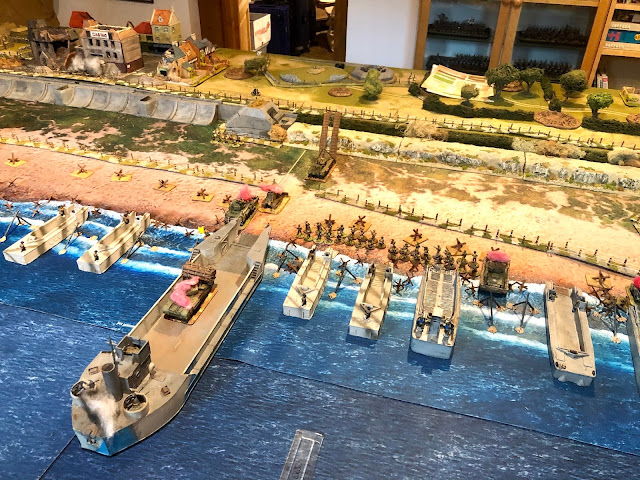 murder in the centre, most of two companies are cut down by MG and artillery fire, I managed to get one tank forward with a bridge alsmost making the wall..... 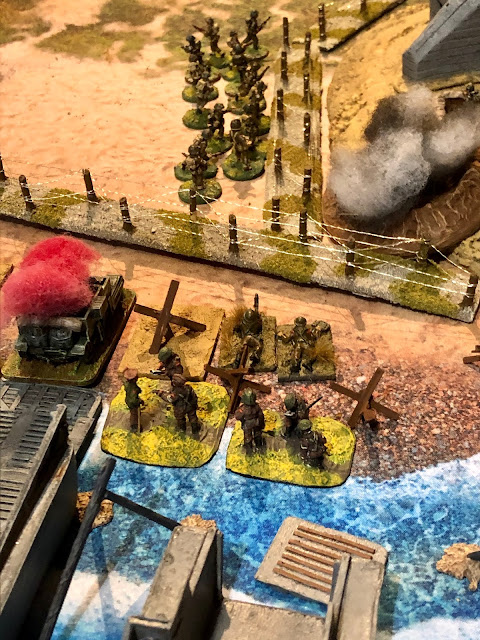 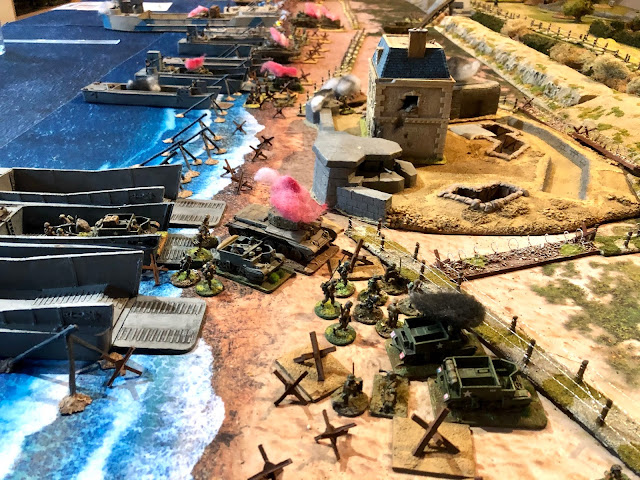 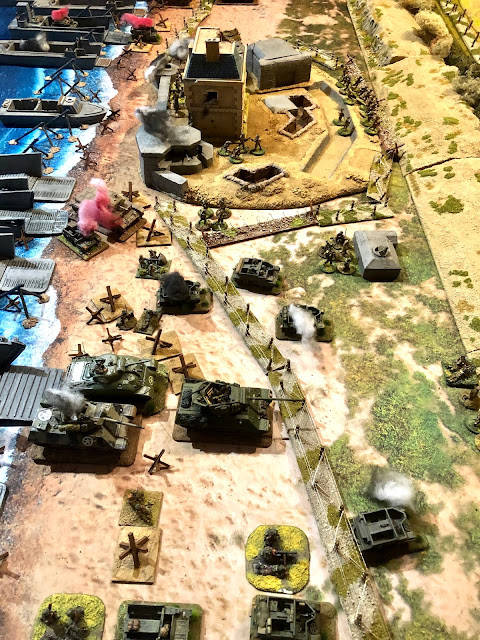 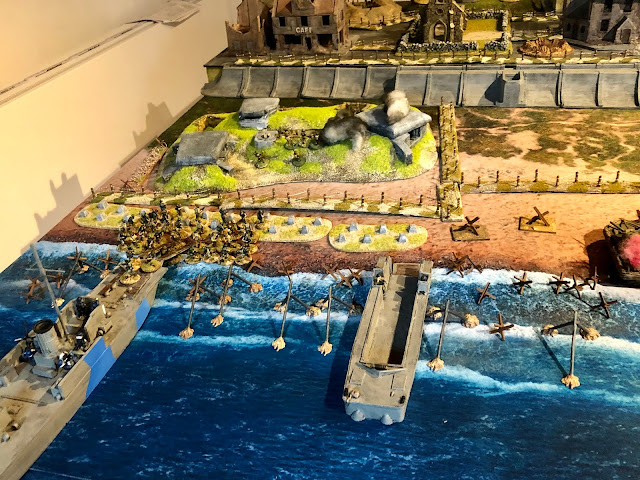 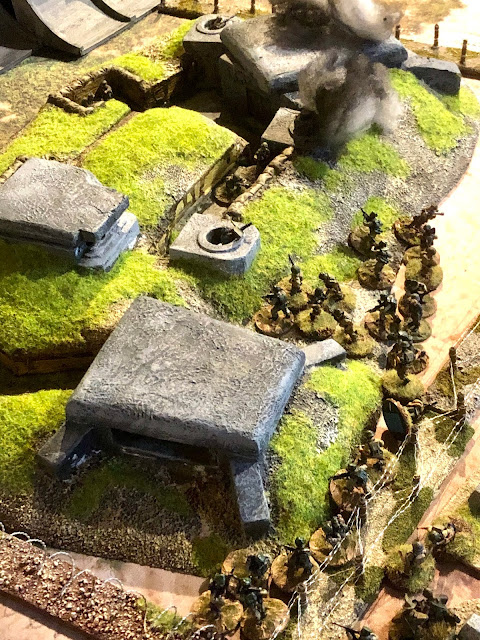 meanwhile a patrol boat moves in for close fire support 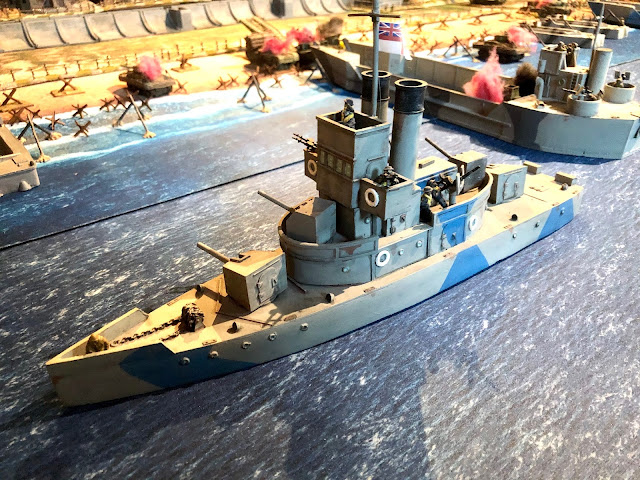 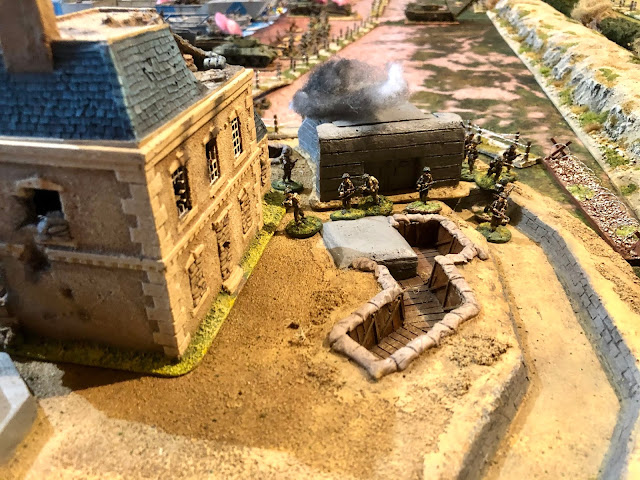 Finally we clear the right, at this stage we call it a draw, I am in control of the beach, but failed to have enough turns to capture the inland bunkers, still a good game, we nearly restarted in the fifth turn as I had lost all of my armour by then except one vehicle........a great time never the less.

I have never really been a fan of actual D-DAY landing games, but really enjoyed this, it really was a spectacle. Paul is planning a visit to mine place in the spring to play either on my Pegasus Bridge table or Arnhem...or something else ......we shall see!

Posted by Bluewillow at 6:40 AM

Bluewillow
Mayenne, Pays de Loire, France
We own a 18th historic Maison particular called L'Hotel de Hercé, built by the Hercé family in 1720. Mitch of the interior is original and we are restoring it to its former glory. We conduct French Wargame Holidays, a B&B and guided cultural and battlefield tours. French Wargame Holidays. Offering our clients the unique opportunity to "walk the Battlefield in the morning, and wargame it in the afternoon"© Our business offers a unique opportunity for both partners to visit, as the Maison offers a relaxing stay, good shopping and great food in the upper Loire. I have a fascination with History, a lifelong wargamer and also historical re-enactment. My main periods of interest are the Roman Empire, Sassanid empire, Dark age Europe, Norman invasions of France and England, early medieval France and England, Heraldry and fealty High medieval , late 17th, 18th 19th century France and Napoleonic German states, also Western Europe WW2 and some modern conflicts.