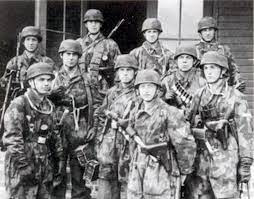 In early March 1945, with Germany being pressed for men, three companies of resting Panzertruppen were released  from the V2 sites, formed into a march regiment and arrived at the HQ of the German Ninth Army on the river Oder to join army group Vistula.
General Theodor Brusse, formed these men along with the 560th SS tank destroyer training battalion as a mobile reserve. On March 9th Major Gustav-Adolf Blancbois 1st adjutant to Army Group Vistula, was selected to command the Kampfgruppe, thus the 1001 Nachtes was formed. Additional troops were also added, Albert Speer's personal protection escort motorcycle company of mixed motorbikes and some kettenkrads,, along with SP AA detachment, an armoured car reconnaissance company and a company of Stug III from the 27th SS Division Langemarck were also added to the kampfgruppe, bringing the strength up to 500 men and 43 serviceable vehicles.
On the 27th of March the Kampfgruppe seen its first action near the town of Genschmar, Northwest of Kustrin, Pommerania to assault the red army bridgehead over the Oder. The division fought with Mucheberg Panzer division and the Fuhrer Grenadier division. On March 30 withdrawal to Alt Rosenthal they had suffered; 5 hetzers destroyed, 20 damaged. The infantry suffered 51 dead, 332 wounded and 32 missing, 40 men fit for service. After this battle Marchregiment Sultan was removed and transferred to Army Group Model. The SS 600 Fallschirmjäger Kompanie then joined the kampfgruppe at this time.
8th April 1945, 37 hetzers and 6 Stug III were fit for service, they moved to Wriezen, Brandenberg and arrived on the 10th of April.
On the 16th April it joined in the defense of the Seelow Heights, moving east of Wriezen to the Alten Oderdamm (old Oder dam) defending the line between Thoringswerder and Altlewin. With the few infantry remaining and some RAD troops they defended the swamp area.
At midnight on the 17th April a counterattack was launched in the area with the 25th Panzergrenadier Division, the 11th Stug-Lehr brigade and the 606th Infantry division defending the town of Wriezen. After fierce fighting the Kampfgruppe was reduced to two companies totalling 18 vehicles and 50 men.
On the 19th the unit retreated through the forest of Wriezen to Steibeck. during the night they reached Lanke on the Stettin Berlin Motorway, defending against constant soviet probes.
On the 20th moving North they reached Finowfurth, and defended the bridge destroying several T-34s.
On the morning of the 21st the Kampfgruppe reached Hubertusstock on lake Werbellin, across the Schorf swamps and the forest beyond, and headed North west towards Templin. I was here that the Hetzers were reformed into one company.  The reconstituted company Kampfgruppe then moved northeast to Prezlau. Fighting withdrawals through Klosterwalde, Kreuzkrug, and Milmersdorf, destroying several T34s and some lend lease shermans.
on the 22nd West of Lychen they joined with 12 Tigers (SS 503?) and withdrew to Mirow after coming under fire from their own AT guns.
On the 23rd of April, they defended with mixed units the town of Mirow, destroying several T34s, but large columns of retreating civilians and troops hampered the defence.
On the 25th the remains of the unit moved to Parchim, roughly midway between Berlin and Hamburg.
On April 29th, Blancbois took command of the Neustrelitz area, Commanding his Kampfgruppe and the the remnants of 547th Volks Grenadier Division.
On the 30th April the reorganised "Speer" Panzer Grenadier Regiment, rejoins the battlegroup?
On May 3rd the remains of the Kampfgruppe leads a counter attack at the village of Jannersdorf, where the Kampfgruppe lost two Tiger Is, two Hetzers and two stug III to the Russians.
On May 4th retiring towards Parchim, where they joined with the elements of the 23rd SS Division Nederland, Heer regiments 250 and 254 also, they fight Advancing American troops around the town of Parchim. In Parchim with the remaining vehicles with no fuel or ammunition the crews destroyed the remaining 26 Hetzers, and two stug IIIs. and then the remaining men surrender to the Americans.
During the 10 weeks of the Kampfgruppen existence it accounted for 284 russian tanks including four JS3(the same claim is made by Mucheberg, this could be the only clash of the JS3, destroyed by Jadgtiger or tiger I?), 147 anit-tank guns, and 150 miscellaneous vehicles.

Panzer-Aufklarungs-Abteilung Speer (panzer grenadier regiment Spree)
It seems that this unit may of increased or have been just renamed on the 3rd of April as the Spree Panzer Grenadier Regiment,  assigned the Wehrmacht Feldpost 43449 it is named Spree not Speer.

I hope you found this interesting as I have researching it, any notes, organisational mistakes I have made please let me know!